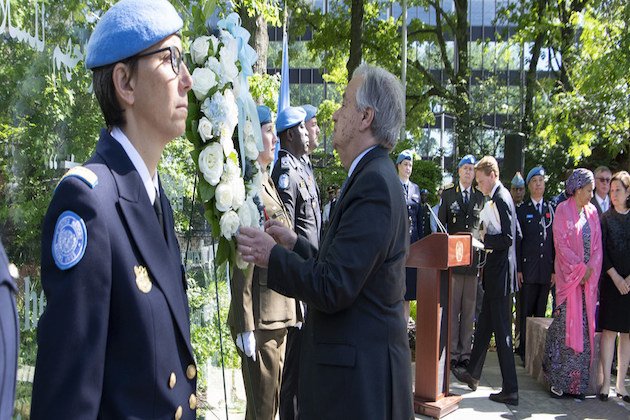 UNITED NATIONS - Since the UN set up its first peacekeeping mission back in 1948, more than 3,800 peacekeepers have lost their lives.

On Friday at the UN headquarters in New York there was a minute's silence for those who have died, along with a wreath laying ceremony.

The UN chief noted UN missions in Mali, South Sudan, the Central African Republic, Lebanon and the Democratic Republic of the Congo "are among the most dangerous that we have ever undertaken,"saying that "last year we lost 98 military, police and civilian peacekeepers from 36 countries."

"We ask much of our peacekeepers", Mr. Guterres said. "In return, we must continue to do all we can to ensure they are as safe as possible."

"Today, we honour the memory" of the peacekeepers who did not return home, and "recommit ourselves to carrying forward their mission for a better future," he said.

"Fifty-eight years ago, Secretary-General Dag Hammarskjöld died in a plane crash in the Congo while trying to broker a peace agreement to end the conflict in the country", said the secretary-general, calling the former UN chief "a tireless and fearless champion of peace" who took "robust action when needed."

"Hailing from different backgrounds, our fallen heroes were united in their efforts to help the UN attain its most important objective, to save further generations from the scourge of war", Mr. Guterres said. "The medal we posthumously honour them with, bears the name of Secretary-General Hammarskjold."

It is also inscribed with the fallen hero's name, "forever linking them in our hearts and in our memories," said the UN chief.

Mr. Guterres quoted Secretary-General Hammarskjold in saying: "The pursuit of peace and progress, with its trials and its errors, its successes and its setbacks, can never be relaxed and never abandoned."

"Today, as we honour our fallen colleagues with the Dag Hammarskjold medal, let us also honour them by living up to his call to never abandon the pursuit of peace," he said.

"I offer my highest tribute to those we remember here today, and my sincerest condolences to their loved ones left behind", he concluded, asking for a moment of silence.

In a special event as part of the commemorations, the UN chief paid tribute to the late Private Chancy Chitete of Malawi, who was hit by enemy fire while protecting and administering lifesaving first aid to his wounded Tanzanian comrade, Corporal Omary.

Private Chitete became only the second winner of the UN's highest peacekeeping award, the "Captain Mbaye Diagne Medal for Exceptional Courage" which was established in 2014 for uniformed and civilian personnel who meet the criteria, and named after the late UN peacekeeper Captain Diagne - the first posthumous recipient of the award - who saved hundreds of lives in Rwanda in 1994, before being killed.

"The world does not have many true heroes," said the UN chief, but Private Chitete, who was serving with the UN Stabilization Mission in the Democratic Republic of the Congo (MONUSCO), was "indeed one of them."

In November last year, while conducting an operation to stop armed attacks which were disrupting the Ebola response in local towns, peacekeepers came under heavy fire. As bullets were flying, Private Chitete dragged Corporal Omary back to an area "of greater safety," Mr. Guterres recounted. "Both were evacuated for medical treatment. Corporal Omary survived. Private Chitete did not".

"Private Chitete's selfless heroism and sacrifice helped the peacekeepers achieve their objective and dislodge the militia from its stronghold and that was vital for the Ebola response to go on," he commended. "He personally made a difference. A profound one."

The ceremony marked the first time the award has been conferred since its initial presentation to the family of Captain Diagne in 2016, said the Secretary-General, adding: "We could not have found a more deserving recipient."

Seventeen dead, 123 injured as jet breaks in two on landing in India

DUBAI, UAE - An Air India Express flight from Dubai with 190 people on board skidded off a runway and ...

Beirut explosion may be turning point for Lebanon

DUSHANBE - Hundreds of fans have come to bid farewell to one of Tajikistan's most popular singers, Bahrom Ghafuri, who ...

Preparedness for nuclear attack or event at lowest point since 1945

It is important to mark the solemn 75th anniversary of the first and only use of atomic weapons against cities ...

Isreeli empathy for Lebanon draws fire from within

BEIRUT, Lebanon - The Lebanese cabinet has ordered port officials who had roles in storing or guarding highly explosive materials ...

NEW YORK, New York - U.S stocks faltered on Friday despite better-than-expected jobs growth in July, and a rebound in ...

Switch is the latest data centre operator to post strong financial results as the global Covid-19 pandemic continues to fail ...

Asian markets topple over after Trump gets stuck into China again

SYDNEY, Australia - Stocks in Asia tanked on Friday as the U.S. took a big stick to China again, banning ...

A gunman with psychiatric problems took six people hostage at a bank in Le Havre, northern France, before giving himself ...

DUBLIN, Ireland - While its future on the other side of the Atlantic, and in the Pacific, is up in ...