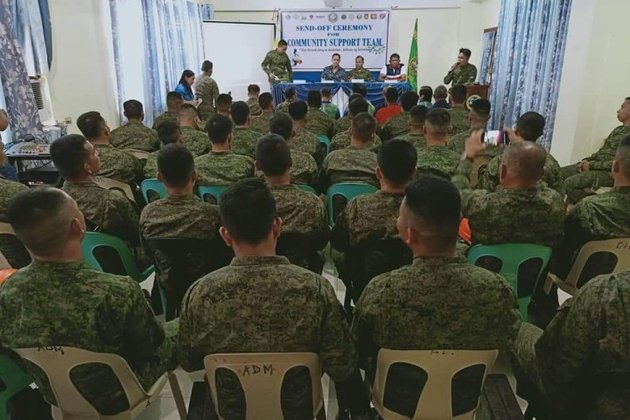 TALACOGON, Agusan del Sur, Sept. 16 - Two towns in the province of Agusan de Sur, together with the 26th Infantry (Ever Onward) Battalion of the Philippine Army have recently launched their Community Support Program (CSP) in two separate send-off ceremonies conducted in Lapaz and Talacogon.

The said ceremonies were initiated to signify the start of the CSP that aims to build a developed and resilient community especially in Geographically Isolated and Disadvantaged Area (GIDA) and Conflict-Affected Areas (ConAAs).

Through the collective and collaborative efforts of the CSP teams composed of the local government units (LGUs), line agencies and 26th IB, the program will be integrated to spur economic growth and address the fundamental issues being confronted and used by the CPP-NPA in polluting the minds of the populace thus arousing hatred against the government.

Michael Lim, Municipal Mayor of Lapaz, expressed his full trust and confidence to the soldiers from whom he expects to work hand in hand as their partner in community development and peacebuilding. "As the newly installed chief executive of this municipality, this CSP is very timely for my goals and objectives in enforcing progress, development and sustainment of economic growth and peace for my constituents especially for those far-flung communities," Lim said.

Meanwhile, Talacogon Mayor Pauline Masendo, likewise received and sent-off the CSP teams and gave assurance that the local government will fully support the soldiers' activities in assisting her constituents towards maintaining peace and development in the area.

Recognizing the importance of delivery of basic services, the 26th IB and other line agencies are geared to uplift economic conditions and achieve sustainable peace in the said towns by utilizing available programs of the government, as the CSP creates significant headway in reaching out to communities.

Meanwhile, Lt. Col. Romeo Jimenea, Commanding Officer of 26th IB said, "CSP deployments are designed to expedite government's development programs by unveiling issues and concerns within the communities that need to be addressed. This is also the answer to strongly enforce EO 70 as it will highlight the whole-of-nation approach in addressing issues and concerns within the localities."

"That's why the different government agencies take part in this send-off ceremony. It doesn't mean that you will also be deployed in the community but anytime of the day you will be called to address the identified issues by our troops," added Lt. Col. Jimenea.

MINNEAPOLIS, Minnesota - A white police officer in the U.S. city of Minneapolis seen kneeling on the neck of a ...

Africa, then Asia to be invaded by locusts, says United Nations

NAIROBI, Kenya, May 29 (Xinhua) -- The Horn of Africa region will experience another swarm of locust invasion in June ...

Russia's most prominent conman left wave of death and deception

This is the story of how the mastermind behind MMM, Russia's biggest financial pyramid scheme, managed to get elected to ...

BEIJING, China May 29 (Xinhua) - A spokesperson for China's Ministry of National Defense on Friday criticized a report recently ...

TEHRAN (Tasnim) - The Atomic Energy Organization of Iran (AEOI) dismissed as "a futile attempt" the U.S.' new decision to ...

HANGZHOU, May 29 (Xinhua) -- AliExpress, a global online retail marketplace and part of Alibaba Group, announced on Thursday that ...

SYDNEY, NSW, Australia - Stocks in Asia skidded on Friday, and the U.S. dollar dived, as the relationship between the ...

PHENOM PENH, Cambodia - Scientists and environmentalists are urging an international moratorium on deep-sea mining after releasing a report indicating ...