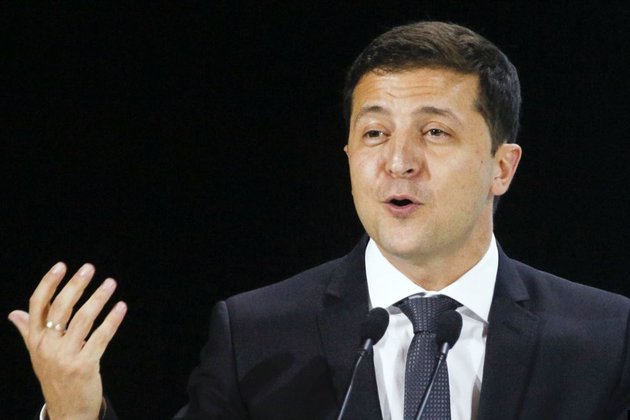 For Russian speakers, here is the live feed from Kyiv by Current Time:

Some 300 journalists are accredited for Zelenskiy's press conference 'marathon' at the Kyiv Food Market.

Bringing Russian-annexed Crimea back into Ukraine's fold is impossible without the help of international partners, Ukrainian President Volodymyr Zelenskiy has said during an interview with RFE/RL's Krym.Realii (Crimea Realities) television while visiting an arms show in Kyiv.

When asked if there's a 'formula' for freeing Ukraine's Crimean Peninsula, the president said one doesn't exist.

'Right now there is no formula. This is a complicated story. As you know, Ukraine can't do this [free Crimea] on its own,' Zelenskiy said on October 9.

'Our international partners [need to set] conditions and we need to have a stronger army. [Sure], we have respect for our military...but honestly, we need to [project] great power so that not only our diplomacy is effective but also so that our army performs at a high level.'

Russia sent troops into Crimea in 2014, eventually taking it over even as it started fermenting a separatist uprising in eastern Ukraine.

As a result, the United States, European Union, Canada, Japan, Ukraine, and other countries imposed sanctions on Russia.

Russian President Vladimir Putin has dismissed a key Kremlin aide whom the United States and European Union have sanctioned for his role in coordinating the takeover of Ukraine's Crimea Peninsula.

Putin's order was signed on October 9 for Sergei Glazyev who had advised the president since 2012.

On October 1, it was reported that Glazyev was appointed minister for integration and macroeconomics of the Eurasian Economic Commission.

Kyiv wants to arrest him for 'committing grave crimes against the foundations of Ukraine's national security, peace, and the international order.'

In particular, Ukraine's Prosecutor-General's Office in summer 2016 began releasing audio intercepts of Glazyev allegedly orchestrating elements of Russia's preparations for and then coordinating the occupation of Crimea beginning in late February 2014.

The intercepts also showed Glazyev during that period coordinating civil unrest in other regions and cities of Ukraine, in particular Odesa, Kharkiv, Zaporizhzhya, and Donetsk.

In 2014 the EU and United States imposed restrictive measures on Glazyev for his role in Russia's annexation of the Crimea.

Pro-Russian elements in late February 2014 began taking over government buildings throughout southeastern Ukraine in Luhansk, Donetsk, Odesa, Kharkiv, and Zaporizhzhya. Ukrainian authorities by April 2014 took back all but two, in Donetsk and Luhansk, the country's two easternmost regions known as the Donbas.

The situation escalated that month when a Kremlin-backed armed uprising erupted in the Donbas.

This ends our live blogging for October 9. Be sure to check back tomorrow for our continuing coverage.

MINNEAPOLIS, Minnesota - A white police officer in the U.S. city of Minneapolis seen kneeling on the neck of a ...

Africa, then Asia to be invaded by locusts, says United Nations

NAIROBI, Kenya, May 29 (Xinhua) -- The Horn of Africa region will experience another swarm of locust invasion in June ...

Russia's most prominent conman left wave of death and deception

This is the story of how the mastermind behind MMM, Russia's biggest financial pyramid scheme, managed to get elected to ...

BEIJING, China May 29 (Xinhua) - A spokesperson for China's Ministry of National Defense on Friday criticized a report recently ...

TEHRAN (Tasnim) - The Atomic Energy Organization of Iran (AEOI) dismissed as "a futile attempt" the U.S.' new decision to ...

HANGZHOU, May 29 (Xinhua) -- AliExpress, a global online retail marketplace and part of Alibaba Group, announced on Thursday that ...

SYDNEY, NSW, Australia - Stocks in Asia skidded on Friday, and the U.S. dollar dived, as the relationship between the ...

PHENOM PENH, Cambodia - Scientists and environmentalists are urging an international moratorium on deep-sea mining after releasing a report indicating ...