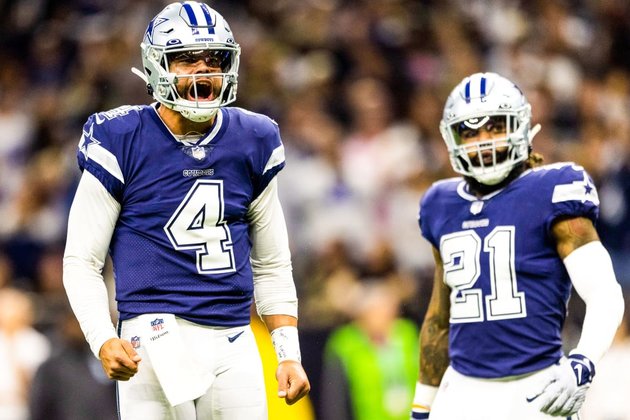 The Cowboys' win over the Saints last Thursday night just got even better.

Not only did they snap a two-game losing streak with a 27-17 win over the Saints, but now it proves even bigger as the two teams behind them in the NFC East standings both won on Sunday.

Washington improved to 6-6 after winning its fourth straight game, edging the Raiders 17-15 in Las Vegas Sunday, staying exactly two games behind the 8-4 Cowboys. And not far behind are the Eagles, who are now 6-7 after beating the Jets. Philadelphia has yet to have its bye week and sit 2.5 games behind the Cowboys.

But for now, the team on the move is Washington, which will host the Cowboys next Sunday at FedEx Field for a chance to pull just one game behind the Cowboys. In fact, the two teams will face off twice in the next three weeks as WFT also plays at AT&T Stadium on Dec. 26.

Washington is currently one of the Wild Card teams in the NFC Playoff picture, if the season were to end now. But they will have their sights on winning the division and can cut the Cowboys' division lead in half with a win next week.

But the Cowboys have some momentum as well, and more than just picking up a much-needed victory in New Orleans. Dallas will benefit from having 10 days off when they play in Washington, but the defense is expecting to get even more key players back on the field.

Defensive end Randy Gregory has missed four games with a calf injury but expected to play this Sunday, marking just the second time this year he'll play alongside DeMarcus Lawrence, who returned from a broken foot to play against the Saints. Both Gregory and D-Law started in Week 1 against the Bucs but haven't been on the field together since. Also, second-year defensive tackle Neville Gallimore could play in his first game of the season after rehabbing a dislocated elbow injury he suffered in the preseason. Trysten Hill will return from a 1-game suspension for a post-game punch against the Raiders, providing even more depth to the defensive line spot.

On offense, the Cowboys are hopeful right tackle Terence Steele can come off the Covid-19 list but it's not certain if he'll resume as the starter over La'el Collins.

Either way, the Cowboys should be rather close to full strength, which is a good thing considering how strong Washington in the last four weeks.