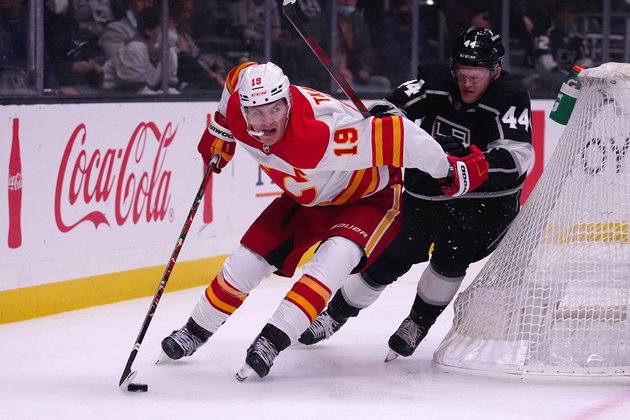 A big part of the Calgary Flames' success this season has been the way they've bolted out of the gates. The inability to gain a quick start has been noticeable of late and caught up to them in Sunday's 3-2 loss to the Vegas Golden Knights.

Therefore, as the Flames head into Tuesday's road clash with the San Jose Sharks, watch for more determination to avoid having to chase the opposition for most of the game.

The Flames have surrendered the first goal in three consecutive games, an eye-opening trend for a club that has opened the scoring in 18 of its 25 games.

"We just weren't as sharp for the whole 60 minutes and they took it to us pretty good, especially the first two periods," forward Matthew Tkachuk said. "We played a little bit better once it was a little easier and we were down, but that can't happen. We have to be ready from the start and play that full 60 that we've been pretty good at this year."

The defeat is hardly the end of the world for a Calgary club that leads the Pacific Division and is tied with the Minnesota Wild for top spot in the Western Conference. The loss snapped Calgary's three-game winning streak and 6-0-2 road run, but it's still a team with only two regulation-time losses in its last 12 games (8-2-2).

As much as the Flames don't want to let one defeat become the start of a losing skid, they have to keep some perspective.

"Obviously we didn't win and that's the most important thing, but we also didn't roll over and die, you know what I mean?" defenseman Chris Tanev said.

The Sharks are also looking to return to the win column. Thanks to Sunday's 6-4 road loss to the Columbus Blue Jackets, San Jose ended a five-game road swing with two losses after winning the first three games of the trip.

"It's the most frustrating game of the year for me," coach Bob Boughner said. "We sort of went brain dead. I know guys are a bit tired, it's the end of a trip, but (Columbus) played (Saturday) night and we didn't."

On the positive, defenseman Brent Burns snapped an 11-game point drought, while forward Nick Bonino has scored four goals in the last seven games after being skunked in the season's first 18 clashes and defensemen Erik Karlsson has scored three goals in four games.

However, none of that took away the sting of wasting the chance to end the road trip on a high.

"It could have been a great trip. We still got six points, but I think we should have had eight," forward Tomas Hertl said.

The Sharks, who are in the thick of the playoff chase -- a big improvement from the last couple of seasons -- are staring at a golden opportunity. The Calgary clash is the start of a seven-game homestand that takes them all the way to the Christmas break.

"We've got to move on," Karlsson said. "We play again on Tuesday against a good team."