Numbers to know from Washington's win in the desert 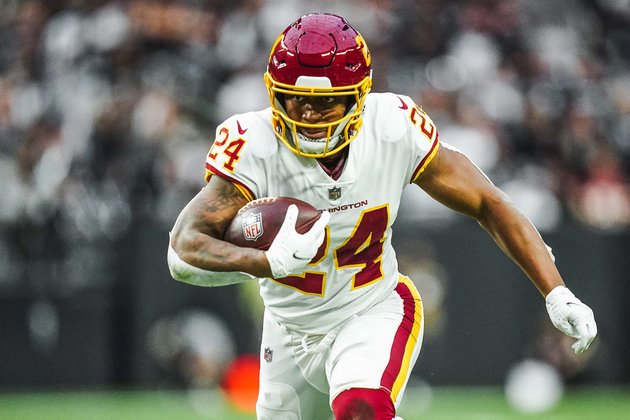 The Washington Football Team won its fourth straight game Sunday night as it took down the Las Vegas Raiders to climb back to .500. Here are three key numbers from the matchup.

Antonio Gibson has consistently provided evidence as to why Washington was right to invest a third-round pick on a wide receiver to play running back. Lately, that evidence has come more frequently, as he's accounted for nearly two-thirds of Washington's 548 rushing yards in its four game win streak.

Gibson finished the Week 13 game with 111 total yards, and not only is it the second time in as many weeks that he has surpassed the century mark, but it also pushed the second-year pro to 2,000 scrimmage yards for his career.

Gibson became the third running back in franchise history to record 2,000 or more scrimmage yards in his first 25 career games. He joins Alfred Morris and Mike Thomas as the only three players to accomplish this feat.

A key piece to this has been Gibson's recent success on the ground. Now that he's healthier from his shin injury, he's running stronger, hitting holes with more decisiveness and gaining yards after contact. He's accounted for nearly two-thirds of Washington's rushing total over the past four games, and with his running mate, J.D. McKissic, out with a concussion, Gibson carried the load with 88 yards on 23 carries.

Unlike Washington's previous two games, yards were more difficult to come by against the Raiders. Its 298 yards were the third-fewest of the season and its fewest in a win. But the team has proven that it can produce, when needed, and that was true once again, as 65% of its yardage came on its three scoring drives.

On its non-scoring drives, Washington averaged 3.3 yards per play. When its offense was clicking, though, that average jumped up to 7.5 yards per play, well above the Raiders' 5.5 average for the night.

Most of that can be credited to Washington getting chunk plays in key moments. On its opening touchdown drive, it had back-to-back gains of 20-plus yards -- a 22-yard run by Gibson followed by a 23-yard catch from John Bates.

On its next touchdown, when it held a 7-6 lead, Taylor Heinicke delivered a sideline pass to Logan Thomas, who then rumbled forward for a 35-yard gain.

Figuring out how to finish games in less-than-stellar offensive performances is how good teams win late in the season, and when it comes to that, few teams have been better than Washington.

Washington fans are all too familiar with the frustration that comes whenever their team plays DeSean Jackson. Over the course of his career, he has 47 receptions for 933 yards and shown time and time again that he can get behind secondaries.

However, that wasn't the case for Jackson in his most-recent outing with Washington. His final stats for the night: one catch for 14 yards on one target.

Jackson was essentially a non-factor against Washington. Granted his fourth quarter reception ultimately led to a Raiders touchdown three plays later, but that was the first time Derek Carr had even looked the veteran's way.

The way the secondary was able to lock Jackson down speaks to just how well Washington performed against one of the best passing offenses in the league. Carr, who did complete 74% of his passes, only managed 249 yards for the evening. It marks the latest edition of an unfortunate trend for the Raiders: they are 0-6 when he throws for fewer than 300 yards.