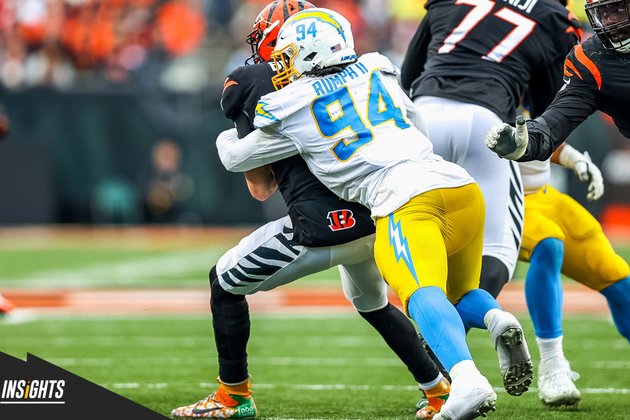 Below are 10 quick-hitting insights after the Chargers' 41-22 win over the Cincinnati Bengals:

1) The Chargers scored 40-plus points for the third time in a game this season. Los Angeles outscored Cincinnati 33-0 in the first and fourth quarters.

2) Justin Herbert became the fastest quarterback in league history to 700 completions. He finished Sunday 26-of-35 for 317 yards, three touchdowns and one interception. Herbert now has 15 300-yard games in 27 career starts.

3) Herbert finished the first quarter of Sunday's game 10-of-12 for 128 yards and two touchdowns. His passer rating was 150.7, the best by a Chargers quarterback in an opening quarter since at least the 1991 season (min. 10 attempts).

4) After forcing three turnovers total in their previous five games, the Chargers defense got four turnovers on Sunday: a Uchenna Nwosu strip-sack and fumble recovery, interceptions by cornerbacks Michael Davis and Chris Harris Jr., and a scoop-and-score 61-yard touchdown by cornerback Tevaughn Campbell after a fumble by Bengals running back Joe Mixon. Los Angeles' D also had a four-turnover game in Week 3 at Kansas City.

5) Entering Sunday, Mixon had five fumbles on 1,020 career attempts. One of those five had come against Los Angeles in Week 1 of the 2020 season.

6) The Chargers had a season-high six sacks in Cincinnati, the most in a game since the 2016 season. Rookie edge rusher Chris Rumph sacked Bengals quarterback Joe Burrow in the fourth quarter of Sunday's game for the first of his career.

7) Safety Derwin James Jr. has 100 total tackles this season, becoming the first defensive back since 2000 to accomplish this feat after missing the previous year due to injury. James Jr. also shared a sack of Burrow with fellow safety Nasir Adderley on Sunday.

Three Major Moments From All In: Episode 8 Snap Counts | Los Angeles Chargers at Cincinnati Bengals What Did Coach Staley, Justin Herbert and Company Say After Beating the Bengals?

8) Wide receiver Mike Williams secured his third 100-yard game this season: five catches for 110 yards, including receptions of 41 and 47 yards. Williams leads the NFL with seven catches of 40 yards or more and is on pace for over 1,200 yards receiving, which would be a career high.

9) Running back Austin Ekeler has now scored at least one touchdown in four straight and in five of his last six games. He's the first Chargers player with at least 15 scrimmage touchdowns since Hall of Fame running back LaDainian Tomlinson had 18 total scores in 2007.

10) The Chargers improved to 7-5 and would be the sixth seed in the AFC playoffs if the season ended today. They're one game behind the Kansas City Chiefs in the division and one game ahead of the Denver Broncos and Las Vegas Raiders. Los Angeles hosts the New York Giants in Week 14; the Chiefs host the Raiders; and the Broncos host the Detroit Lions.