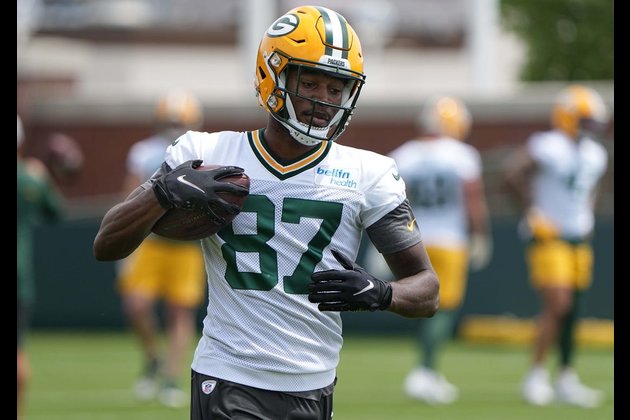 Aaron Rodgers' penchant for donning his GM cap persists even after the Packers paid up to keep the Green Bay quarterback content.

Rodgers, working with a reshuffled stack of talent at wide receiver in the aftermath of No. 1 target Davante Adams moving on via trade to the Las Vegas Raiders, said he likes what he sees so far in training camp.

"Allen Lazard is going to step into the No. 1 role," Rodgers said, "and I think it's going to be a very seamless transition for him as a primary blocker and kind of a niche guy for us, to get an opportunity to get more throws, be No. 1 in the progression more often."

But there could be big things in store for fourth-round pick Romeo Doubs, who is winning over Rodgers in training camp and making headlines with his big-play flair. Doubs has taken advantage of second-rounder Christian Watson spending the first week of camp on the physically unable to perform list, and Sammy Watkins being slowed out of the gate.

"Romeo Doubs has had a really nice start to the camp," Rodgers said. "He's been getting a lot of attention based on some of the plays that he's made. I like the approach. Very understated kid, very humble kid from kind of inner city L.A., made his way to Nevada."

Doubs, 6-foot-2 and 204 pounds, was All-Mountain West at Nevada with 80 receptions and 11 touchdowns in 11 games in 2021. Before opening eyes at the Senior Bowl on the pre-draft circuit, Doubs caught national attention with a 19-catch, 203-yard showing at Fresno State last October.

"I was sitting with him at lunch the other day and really just marveling," Rodgers said. "It's surprising how many teams passed on him. Whatever reason it was, we all feel really good about Romeo and the start he's gotten off to."