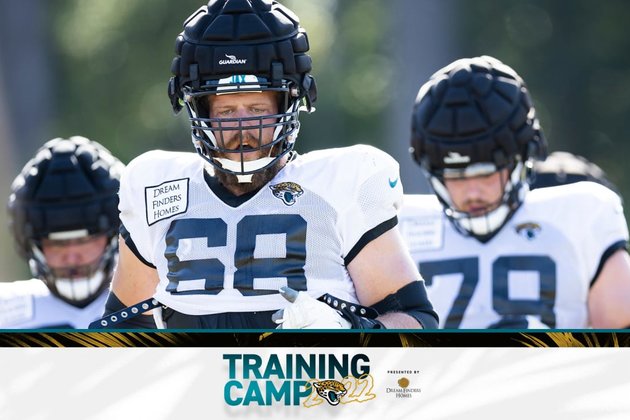 JACKSONVILLE - The Jaguars did some hitting Sunday.

They talked about hitting, too, with a major focus of Jaguars 2022 Training Camp Day 6 a revamped, evolving offensive line that currently features significant competition.

And make no mistake:

With the Jaguars in full pads on Sunday for the first time in '22 camp, the day marked the beginning of a critical time for what many view as perhaps the team's top training-camp storyline.

"You put the pads on, this is where really the evaluation process comes in. Playing against good competition, starters playing against starters, you can make a better determination with some of these battles."

Left tackle: Cam Robinson, the starter at left tackle since 2017.Left guard: Tyler Shatley, a veteran swing interior lineman who started extensively at center in recent seasons, and Ben Bartch - a third-year veteran and an 11-game starter at right guard in 2021.Center: Rookie Luke Fortner, a third-round selection from Kentucky in the 2022 NFL Draft. Fortner has worked with the first team throughout '22 camp.Right guard: Brandon Scherff, a five-time Pro Bowl selection who signed as an unrestricted free agent from Washington in March.Right tackle: Jawaan Taylor, a three-year starter at right tackle, and Walker Little - a second-round selection in the 2021 NFL Draft who started three games at left tackle in 2021.

"I think we have a pretty good group and I think we're excited to keep stacking them one day at a time," Scherff said, adding that pads matter very much for an offensive lineman:

Areas to watch as the preseason begins with the Pro Football Hall of Game against the Las Vegas Raiders in Canton, Ohio, Thursday: The right tackle and left guard competitions, and how Fortner handles starting as a rookie at a demanding position.

"We want to see Luke in there," Pederson said, adding that depth and experience of the top seven lineman gives the Jaguars valuable options at the position. "With Luke, he's done really well. He's not only going in as a potential starter at center, but then Shatley can be the guard or he can move back to center. You just got to have some combination of guys that if something happens during the regular season, you can move guys around."

Scherff, the most accomplished Jaguars offensive lineman, quickly emerged as a team leader this offseason - and he likes what he sees as he begins practicing in pads with the group for the first time.

"Everybody's coachable and trying to do what [offensive line coach] Phil [Rauscher] asks us to do," he said. "You see some of those plays we're breaking out 20, 30, 40-yard runs. That's what you want to see as an offensive line. It's kind of cool, doing our job and then seeing [running backs] Travis [Etienne Jr.] and Ryquell [Armstead] and Snoop [Conner] hit those holes and there's nobody around him. So that's, that's when we know that we're doing our job and we just have to keep stacking them."

Pederson on Sunday addressed the Friday waiving of rookie kicker Andrew Mevis, who struggled Thursday when he missed three of four field goals in a team special teams period. The Jaguars signed veteran Elliot Fry Friday, leaving Fry and Ryan Santoso competing in camp. "It's unfortunate," Pederson said of Mevis' waiving. "Sometimes with young guys, you hate to see it, but sometimes they put a little bit too much pressure on themselves just to try to do things right and compete. You just have to learn to relax and play. We wish him well and hopefully we'll see him again down the road."

Pederson on outside linebacker Travon Walker, the No. 1 overall selection in the 2022 NFL Draft: "So far, it has been good. He studies well. He's a student of the game. He's hard on himself. If he makes a mistake, he usually doesn't make it again. That's good to see from young guys."