Sky set sights on a season sweep of Wings 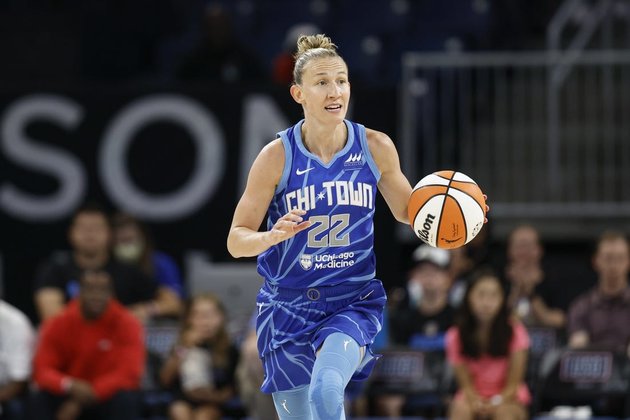 As the Chicago Sky attempt to maintain their spot atop the WNBA standings, the Dallas Wings are trying to remain in playoff position.

The Sky aim to match the club record for victories, extend their franchise-high home winning streak to 11 games and complete a three-game season sweep of the Wings on Tuesday night.

Beginning the regular season's final stretch, Chicago (23-7) holds a one-game lead over second-place Las Vegas and is a win away from the team-record 24 wins set in 2013. The Sky are coming off Sunday's 95-92 overtime win at Connecticut.

"To be honest, we're not paying attention to (the playoff race)," Chicago star Courtney Vandersloot, who had 16 points and 12 assists Sunday to move into third place on the WNBA's all-time assists list with 2,350.

"We're focused on us, making sure we're getting better."

Kahleah Copper had 27 points for the Sky on Sunday. She has averaged 19.8 points in the last four games and totaled 42 points during Chicago's two July victories over Dallas.

However, Sky coach James Wade noted that Copper has been dealing with some injuries. He hopes she'll play Tuesday, along with fellow star Candace Parker (13.6 points, 8.9 rebounds, 4.5 assists), who has missed the last two contests with a non-COVID-19 illness.

Dallas (13-16), meanwhile, sits sixth in the league but just two games ahead of 11th place. The Wings are coming off an 81-68 victory at Atlanta on Saturday, but they haven't won consecutive games since June 17-19.

Dallas' Teaira McCowan scored 15 at Chicago. She has averaged 18.3 points over the last four games and totaled 25 rebounds in the last two.

"She's a walking double-double, even if we don't run any plays toward her," Wings coach Vickie Johnson said of the 6-foot-7 McCowan.

"The league doesn't have an answer for her."