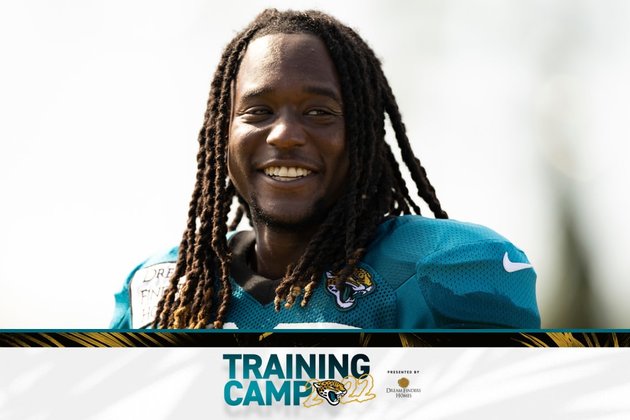 JACKSONVILLE - Shaquill Griffin was fine with the question.

The veteran cornerback expected to be asked about interceptions when meeting with the media Monday on Day 7 of Jaguars 2022 Training Camp. Notably, he had no issue with the question. Perhaps most notably, he wanted to be the one discussing it.

Will the Jaguars be better in this area? Absolutely, Griffin said.

"Guarantee," he said. "I guarantee it's going to be way better than last year."

The Jaguars enter the '22 season looking to improve in many areas. Record. Offensive production. Many individual players. Specific to the defense, they must improve the run defense and pass rush after struggling at times in both areas last season.

Perhaps most urgently, the defense must improve creating takeaways after forcing a league-low nine turnovers in 17 games last season.

Griffin, after signing as an unrestricted free agent in the 2021 offseason, had multiple opportunities for interceptions last season. He dropped at least four as the Jaguars finished with seven interceptions as a team.

"I'm out here trying to catch footballs every day."

As was the case last season, he remained candid Monday about the need to improve personally in this area - and about the responsibility he feels to create big play. Griffin, after registering an interception early in camp, registered another Monday - as did safety Rudy Ford.

"It starts with me," he said. "That's how I feel. They have to start with somebody. I feel like picks come in bunches, but someone has to get the first one. I definitely put it on myself and we will be better this year."

Jaguars offensive coordinator Press Taylor, in his first year as an NFL offensive coordinator, said he plans to work from multiple places on preseason game days this month. He said Monday he will work from the sidelines when the Jaguars play the Las Vegas Raiders in the Pro Football Hall of Fame Game in Canton, Ohio, Thursday and that he likely will work from the press box later in the preseason. "We'll try to mix and match a figure out who's responsible for what down on the field, up in the box, how we communicate well together," he said. "That's kind of the benefit to having this extra preseason game compared to everybody else. It's one more opportunity to figure out what works best for us come Week 1."

Taylor on Monday praised second-year right tackle Walker Little, who has taken most of the first-team reps at the position with fourth-year veteran Jawaan Taylor missing recent practices with a hamstring injury. Little and Taylor entered camp expected to compete for the starting right-tackle position. "Walker's done a great job," Taylor said. "He's stepped up as things got more physical. He's done a great job in the battles he's had and also playing next to the guys he's been able to play with. That's the benefit of being able to shuffle our offensive line: You see how guys work next to one another."