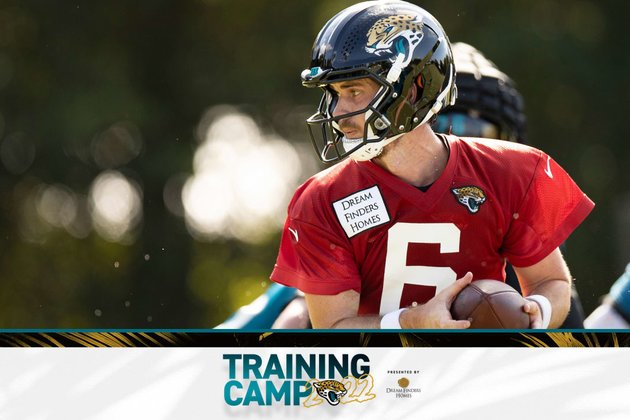 "Trevor's been getting a lot of great looks in practice, and we feel like he's in a good spot," Pederson said.

Jake Luton, the Jaguars' third-team quarterback, will start against the Las Vegas Raiders at Tom Benson Hall of Fame Stadium in Canton, Ohio, Thursday. Backup quarterback C.J. Beathard has been rehabilitating a groin injury throughout the first eight days of Jaguars 2022 Training Camp.

"I'm excited," said Luton, who started three games for the Jaguars in 2020 and who re-signed with the team in February after spending parts of last season with the Seattle Seahawks and Miami Dolphins. "They let me know I was going to start. I'm just excited to be back in a Jaguars uniform and to get to go out and play with the guys, so I couldn't be more fired up.

Added Luton, "I just want to go out there and execute. I think this camp we've done a lot of good things. We'll go out and put our best foot forward. I want to move the ball around, get the ball in my guys' hands and help the offense be in the best position to just execute."

Pederson said coaches are still working through other playing-time decisions, but that he expects starters to play Thursday.

"We're going to make those decisions this afternoon and tell our team later on today so we can prepare for the game," Pederson said Tuesday morning before a light Day 8 practice at the Episcopal School of Jacksonville Knight Sports Campus.

Pederson said he believes in telling players their playing status before preseason games.

"Particularly the quarterback position," he said. "It just kind of prepares their mind a little bit. Jake will be the starter and he'll get a lot of time."

Pederson praised Luton, a third-year veteran, as a "student of the game."

"He's been doing well," Pederson said. "He can make all the throws. He's done well. We continue to work with him. We've been pleased with Jake's progress so far."

While Pederson did not announce how much - or if - other starters and front-line players will play Thursday, he said he wants "to see everybody play."

"I want to see all the guys in uniform who dress get snaps," he said. "It's still evaluation time, right? We're still evaluating our roster. We have a lot of young guys and a lot of battles that we want to really start seeing in game situations."

Pederson said the expectation is for veteran players not playing in the preseason to be engaged and help younger players.

"It's part of their job," Pederson said. "I don't care if they play a series and come out: They're still going to be engaged and really help the young player and be another set of eyes for them."

Pederson also said running back Travis Etienne Jr. will not play Thursday. Etienne has practiced full throughout '22 camp after missing his rookie season with a Lisfranc injury sustained last preseason.

"He's done some great things in practice," We just want to protect him a little bit, with the injury, just making sure he's 100 percent healthy as we get ready for the regular season."

Pederson on the first few days in full pads of '22 camp: "It's been a very good week. It's been productive with the pads on this week. We've been able to get quite a few things done. We've still got a lot of work to do, obviously."