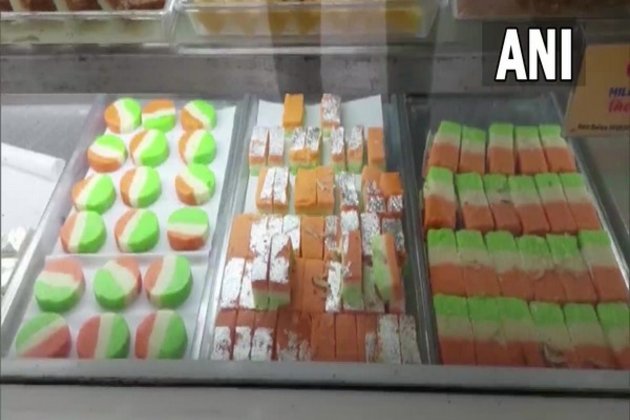 Vadodara (Gujarat) [India], August 5 (ANI): With Independence Day approaching, various forms of the tricolour can be seen dominating the market all over India under the 'Har Ghar Tiranga' campaign as people from across the country are participating extensively in the campaign with full fervour.

In Vadodara, tricolour can even be found in sweets. Under the Azadi ka Amrit Mohatsav, the 'Har Ghar Tiranga' campaign is being celebrated to commemorate 75 years of India's independence. A halwai in Vadodara has made sweets in tricolour for this occasion.

Naval Bhumiya, the shopkeeper said, "To give a look to the sweet, vanilla essence has been used for saffron colour for white colour and pistachio essence for green colour."He was inspired by the administration to make sweets in the form of tricolour.

"At present, Tricolour Shrikhand will also be made along with Tiranga Malai Penda and Tiranga Barfi," said Bhumiya.

Union Home Minister Amit Shah on Tuesday said that the "Har Ghar Tiranga" programme is a message to the world that every citizen of India is united to take forward India's journey of development, prosperity, security and culture.

PM Modi on Sunday called upon all citizens to turn the 'Har Ghar Tiranga' campaign into a mass movement by hoisting or displaying the national flag at their homes and using the 'Tiranga' as a display picture on their social media accounts between August 2 and August 15 to commemorate the 75th anniversary of India's Independence.

"Under the Azadi Ka Amrit Mahotsav, from the 13th to the 15th of August, a special movement - 'Har Ghar Tiranga' is being organized. Let us further this movement by hoisting the National Flag at our homes," said Prime Minister Narendra Modi on Sunday while addressing the monthly radio programme 'Mann Ki Baat'.

Prime Minister Narendra Modi launched Har Ghar Tiranga campaign on July 22 to encourage people to bring the Tiranga home and hoist it to mark the 75th year of India's independence. The idea behind the initiative is to invoke the feeling of patriotism in the hearts of the people and to celebrate Azadi Ka Amrit Mahotsav in the spirit of Jan Bhagidari. (ANI)