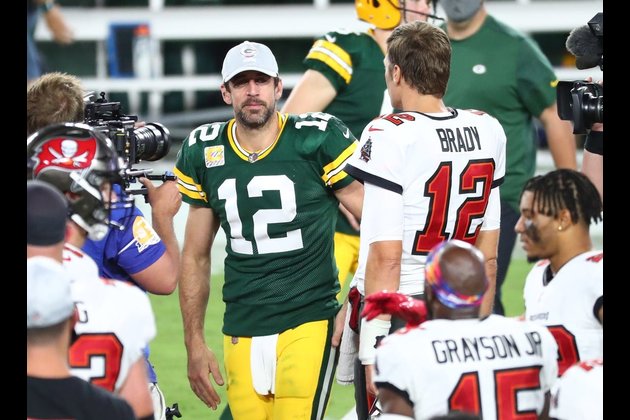 Future Pro Football Hall of Fame quarterbacks Tom Brady and Aaron Rodgers look to make the most out of their respective wide receiver groups on Sunday when the Tampa Bay Buccaneers host the Green Bay Packers.

The Buccaneers (2-0) will be without four-time Pro Bowl selection Mike Evans, who will serve a one-game suspension for instigating a fracas with New Orleans cornerback Marshon Lattimore during Tampa Bay's 20-10 win over the Saints last Sunday.

Evans has recorded team-leading totals in catches (eight) and receiving yards (132) this season for Brady, who has struggled to get on track. Brady is averaging just 201 yards passing and has totaled two touchdowns in 2022 after throwing for a franchise-record 5,316 yards and 43 TDs last season.

"All you have to do is No. 1 look at their ability to win games and lead teams," Packers coach Matt LaFleur said. "Tom's won a ton of Super Bowls (seven). You look at the talent of both (Brady and Rodgers) and it's not surprising why they're referred to as two of the greatest ever. I think they're both great competitors."

While Evans won't be on the field Sunday, it's not immediately known if fellow wideouts Chris Godwin (hamstring) and Julio Jones (knee) will be able to play after one-game absences due to their respective injuries. Godwin and Jones did not practice on Wednesday, while fellow wideouts Breshad Perriman (knee), Russell Gage (hamstring) and Scotty Miller (calf) were limited.

With the availability of several wideouts in question, the Buccaneers signed veteran Cole Beasley on Wednesday.

Rodgers, the reigning back-to-back NFL MVP, has failed to get his offense in gear since the Packers (1-1) traded five-time Pro Bowl selection Davante Adams to the Las Vegas Raiders in March.

Sure, Rodgers threw one of his two touchdown passes to Allen Lazard in the latter's season debut during Green Bay's 27-10 victory over the Chicago Bears last Sunday.

Veteran Sammy Watkins leads the Packers with 111 yards receiving, while his six catches are tied with three others for the club lead.

In addition to a relatively unproven wide receiver group, Rodgers and company will square off against the league's top scoring defense through the first two weeks of the season. The Buccaneers have allowed just 6.5 points per game.

"They both can do everything," Tampa Bay coach Todd Bowles said. "Obviously, Aaron is faster -- he plays wideout, he plays running back, he moves inside, he moves outside, he plays the slot -- he does a lot of things great. He's very explosive when he catches the ball and when he runs the ball, he can break it and he can turn a 4-yard gain into a 60-yard gain.

"A.J. is just tough to bring down. He's tough -- not only is he tough, he has very good feet. He can catch the football as well. Those two, along with Aaron (Rodgers) and the rest of the guys -- it's going to be a tough draw," Bowles added.

Also, the Buccaneers could be without defensive tackle Akiem Hicks (foot) for a month.

School children gunned down by ex-student at school in Russia

MOSCOW, Russia - At least fifteen people, including 11 pupils, have been killed in a mass shooting at a school ...

LUCKNOW, India: Thirty-six people, including 12 struck by lightning, have been killed in northern India over the past 24 hours, ...

LONDON, England: The non-profit organization Presidium Network has announced that five British prisoners of war captured in Ukraine have been ...

KUALA LUMPUR, Malaysia - Southeast Asian nations must decide whether a five-point plan to end the violence in Myanmar is ...

NEW DELHI, India - The Indian state of Tripura has decided to form a special investigation team (SIT) of local ...

ISLAMABAD, Pakistan - Prime Minister Shehbaz Sharif has stated that Pakistan may need to import over a million tonnes of ...

NEW YORK, New York - U.S. stocks had a choppy day Monday, which was marred by severe gyrations in bond ...

HOLLYWOOD, California: Ahead of its 100th anniversary, the world famous Hollywood sign on Mount Lee overlooking Los Angeles is being ...

WASHINGTON D.C.: The U.S. Senate Judiciary Committee has approved a bill that will allow news organizations to jointly negotiate with ...

SYDNEY, NSW, Australia - An extraordinary plunge in the British pound to an all-time low on Monday has spooked investors, ...

AUSTIN, Texas: Due to increased risks caused by a fault in its automatic window reversal system, electric vehicle maker Tesla ...